10 Most Dangerous Animals of Amazon Rainforests

10 MOST DANGEROUS ANIMALS OF AMAZON RAINFORESTS!

Make sure to subscribe for more 50M videos! If you enjoy 50M Videos why not leave a like too, for more educational videos everyday!

Going to the Amazon rainforests in almost every tourist’s dream, as it is the biggest forest in the world. It has been recorded that the forest is home to more than 30 million incest species and other animals too. It generates around 21% of the total oxygen of the world, so you can guess it’s importance. With all that, the forest is also home to the most dangerous animals in the world. Going to amazon without knowing about them can put you in grave danger. Let us tell about the 10 most dangerous animals of amazon rain forests, but before we get it that don’t forget to subscribe.
Number 10.) Bullet ant
The bullet ant is one of the creatures of the Amazon rainforest that is best avoided, if you can spot it. This small incest is are capable of bites that can trigger an extreme level of pain in the bitten area. The sting from a bullet ant is perhaps the most painful insect sting ever known to humans. The venom-filled sting from a bullet ant would feel like being shot. That’s why this deadly ant is named bullet ant. They are found in the lowland rainforests of Nicaragua, Bolivia, and Paraguay. They mainly inhabit at the bases of trees. bullet ants are also among the largest ants in the world. Bullet ant sting is almost 30 times more painful than a honeybee sting. They use such intensely painful sting solely for the defense. When threatened, no matter whether it’s a large animal or a human, bullet ants will sting repeatedly. Their venom causes intense pain, burning and swelling. Typically, the pain of bullet ant sting will last for 24 hours.
Number 9.) Piranhas
The piranhas are probably the most feared predator of the Amazon rainforest. They are freshwater fish known for their powerful jaws and razor-sharp teeth. They have one of the strongest bites among bony fishes and the black piranha’s bite is one of the most forceful bites among vertebrates. The bite of the piranha can easily tear through all flesh including that of humans. They primarily feed on fishes, insects, algae, and seeds. The group attack from piranhas is rare. During the starving period or when provoked by humans or other animals, they attack in a group. A group of hungry piranhas will attack almost anything they found within their range. Interestingly, a group of piranhas could strip even the flesh of a large animal within minutes. The sharp, triangular teeth and powerful jaws aid them in such an attack. Piranha attacks on humans are rare. However, in the dry season when food is scarce, they may attack even humans.
Number 8.)electric eel
Despite the name, it is not an eel, but rather a knife fish. Electric Eel is the only species in the Amazon ecosystem that can blast prey with 500 volts of electricity. These electric fish inhabit fresh waters of the Amazon basin and Orinoco river in South America. Three pairs of abdominal organs of the fish allow it to generate electricity enough to stun an adult human being. The eels use their electricity generating capacity to stun prey before consuming them. Fatal attacks on humans are rare but not completely non-existent. Many humans have suffered shocks from electric eels, often while accidentally stumbling upon them, though they rarely die. death only occurs with multiple shocks or when the victim is too paralyzed to move and ends up drowning. It is classified as the top 25 predators in the world. The electric eels grow between 6 ft and 8 ft in length and almost 20 kg in weight.
Number 7) poison dart frog
Poison dart frogs are some of the most colorful creatures you’ll find in the Amazon rainforest. They are generally found in rainforests of Costa Rica, Brazil, Colombia, Ecuador and Venezuela. But beware, their bright coloration is a warning. These brightly colored species of frogs have great toxicity and levels of alkaloids poison which they secrete through their skin, which is absorbed in large amounts, can cause heart failure within minutes. The golden poison dart frog is the most poisonous species of the family. It is estimated that they contain enough venom to kill 10 adult humans. In the Amazon, they found in marshes, lakes, swamps, streams, and rivers. In the wild, the poisonous dart frogs gain the highly dangerous poison from their diets such as ants, centipedes, and termites.
Number 6.) Wandering Spider
This extremely aggressive and deadly spiders found in the Amazon rainforest of several South American countries including Brazil, Peru, Ecuador, and Venezuela. The Brazilian wandering spider is the most venomous arachnid in the world. Even the scientific name of the spider Phoneutria means "murderess" in Greek. They also found in many human-inhabited parts of Brazil. As the name suggests, Brazilian wandering

10 Most Dangerous Animals of Amazon Rainforests 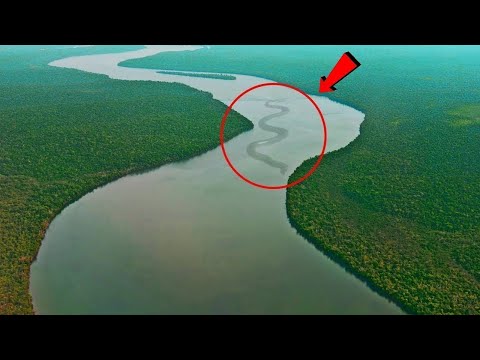